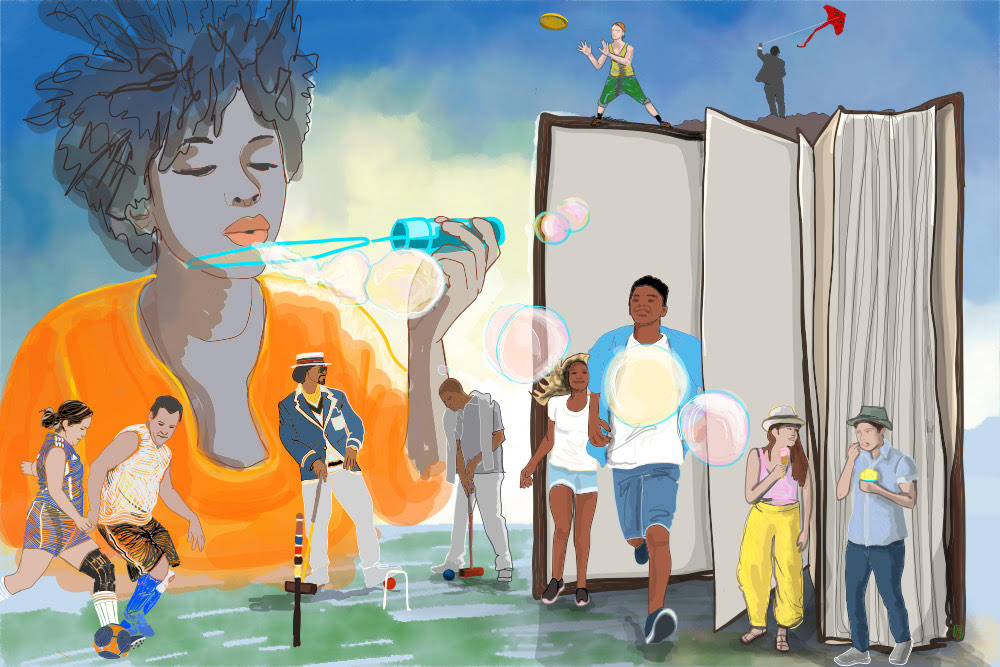 What will the summer of 2021 hold? Pods are out, but is wedding season in? Masks are no longer required outside, but when do we need them? We can hug our friends and family… right? At Zócalo, we don’t promise clear-cut answers, but we pride ourselves on asking smart people the right questions. So, as we do every summer, we turned to a group of friends and contributors—from a U.S. senator and a chancellor to a playwright, a materials scientist, and a designer—to recommend their favorite recent nonfiction books. They came through, offering up memoirs from legends in their fields, nonfiction that takes on our current crises (from immigration and racism to global risks), histories—including one in graphic novel format—and more. Whatever this summer turns out to be for you, and we hope it’s everything you imagine, we think you’ll find some inspiration for it on this list that will not only answer some of your questions about the world, but keep you asking more.

THE PRECIPICE: EXISTENTIAL RISK AND THE FUTURE OF HUMANITY

Before 2020, few Americans realized that a global pandemic could upend our lives and world so quickly. The COVID-19 crisis highlighted the urgent need for disaster prevention and investments in resilience, especially for our most vulnerable communities. The Precipice is a timely and thoughtful look at major risks we face today, set in the context of humanity’s astounding progress over the last 2,000 years. It is a sobering topic, but leaves the reader hopeful that we are capable of exceptional things. I’m confident that if we work together to rebalance our priorities, we can equip ourselves to meet the challenges that lie ahead.

Before I dove into this book, I had a chance to hear the author speak about her research, and the ways in which she linked democracy, race, and the pleasures of cruelty convinced me that I needed to read this book right away. I did. A short text, Cruelty as Citizenship contextualizes contemporary xenophobia in historical terms, including the lynchings of Mexican Americans, and argues that democracy in the U.S. is based on white people having a right to perpetuate violence against people of color. It’s a devastating and critical read.

SET THE NIGHT ON FIRE: L.A. IN THE SIXTIES

by MIKE DAVIS AND JON WIENER

L.A. is fantasyland and quickly makes myth of everything, including its own history. Mike Davis and Jon Wiener’s encyclopedic history of L.A. in the ’60s opened my eyes to how thoroughly fabulized my own understanding of this fractious decade has been. Davis and Wiener also showed me that L.A. is a time machine. It’s where the future is born. The core conflicts around race and class and out-group demands for rights and opportunity that set L.A. on fire in the 1960s are the very same ones that are convulsing the country as a whole today. Back to the future indeed.

As a student (and practitioner) of leadership, I read His Very Best so I could learn from President Carter’s life accomplishments and lessons. He was an imperfect person and politician and, unfortunately, the hostage crisis in Iran and an energy crisis at home defined his presidency in a negative way for many Americans. However, his disciplined, compassionate (rooted in his strong religious beliefs), and innovative leadership focus led to more peaceful relationships between the U.S. and other countries (especially in the Middle East). And his progressive ideas led to powerful legacies such as the U.S. Department of Education and the now-critical solar energy sector. Carter’s long post-presidential life has, in many respects, been a model for how to dedicate one’s unique leadership experiences to advance the greater good throughout the world.

JUST AS I AM: A MEMOIR

Cicely Tyson personifies Black Girl Magic. The Academy-, Tony-, and three-time Emmy Award-winning actor and trailblazer, known for her work in The Autobiography of Miss Jane Pittman, A Woman Called Moses, and Roots, reflects on her life and career spanning more than seven decades, transforming from the church girl who once rarely spoke a word to one of the most prolific actresses of the century. This is a must-read for anyone who wants to learn more about this icon.

CHILDREN OF THE LAND: A MEMOIR

In lyrical, introspective prose, this memoir by poet, activist, and DACA recipient Marcelo Hernandez Castillo shows us America from the perspective of undocumented immigrants and their kin—people who experience the border not just as a physical barrier, but as a deeply embodied technique of psychological domination. The hyper-visible border contrasts with the invisibility and constant vigilance it imposes on the author’s family: its function is “to be carried in the imaginations of migrants deep into the interior of the country, in the interior of their minds.” In addition to chronicling the author’s long-term struggles to navigate immigration policies that divide his family and his psyche, Children of the Land evokes the beauty of landscapes on both sides of the border in which Hernandez Castillo can never feel fully present.

I’M NOT WHO YOU THINK I AM: AN ASIAN AMERICAN WOMAN’S POLITICAL JOURNEY

As an Asian American woman in government and politics, we don’t often get to read stories of people who look like us. Tom’s story is beautiful and encompasses a life of resilience, strength, and powerful lessons we can all apply in our own lives and professional careers. I hope more people read about her journey—she’s a trailblazer not just for Asian Americans but for all women wanting to break glass ceilings.

BALLAD OF THE BULLET: GANGS, DRILL MUSIC, AND THE POWER OF ONLINE INFAMY

Based on three years of in-depth research on Chicago gangs, Ballad of the Bullet tells the story of how poor urban youth in Chicago use social media to profit from portrayals of gang violence, and the questions this raises about poverty, opportunities, and public voyeurism.

Materials Scientist and Author of The Alchemy of Us

The Black Panther Party has always been controversial, but here is a chance to get a more nuanced account of their impact. Did you know they had a free breakfast program for children? Did you know they had a free medical clinic? Did you know the FBI targeted them? In this graphic novel, readers see the power of young people envisioning a different world. Sure, this story is complicated, with heaps of ego, hubris, competition, force, and brutality. But this book is about love, too. It is about how a group of young men and women wanted a better life for Black people and did everything within their power to get it. This book is also a parable for how to do that work better today. If you want a fuller story about this often-maligned group, this is your book. Get it!

THE SUM OF US: WHAT RACISM COSTS EVERYONE AND HOW WE CAN PROSPER TOGETHER

My favorite book of the year shows how racism costs EVERYONE and offers some solutions for all of us!

If there ever was a memoir about someone down to her last strike with two outs in the ninth who used that last swing to change her life forever, then this is it. Along with her former soulmate Tom Waits, Rickie Lee Jones is among Los Angeles’ foremost troubadours, and she tells her life story with the kind of gusto for detail that makes her songs stand out. For anyone feeling like they drew the short end of life’s stick, this memoir shows how it’s possible to hit a grand slam with the butt end.

THE MONOCLE BOOK OF GENTLE LIVING: A GUIDE TO SLOWING DOWN, ENJOYING MORE AND BEING HAPPY

This book feels more like a magazine, which isn’t a surprise as it’s from the publishers of Monocle magazine. The last year has been quite stressful for many of us, and this encourages us to slow down and be happy. I liked the little practical tips around just living life and the nudge to try new things. The book has little essays and you can flip between the sections that interest you the most. “Get lost” was one of my favorites.