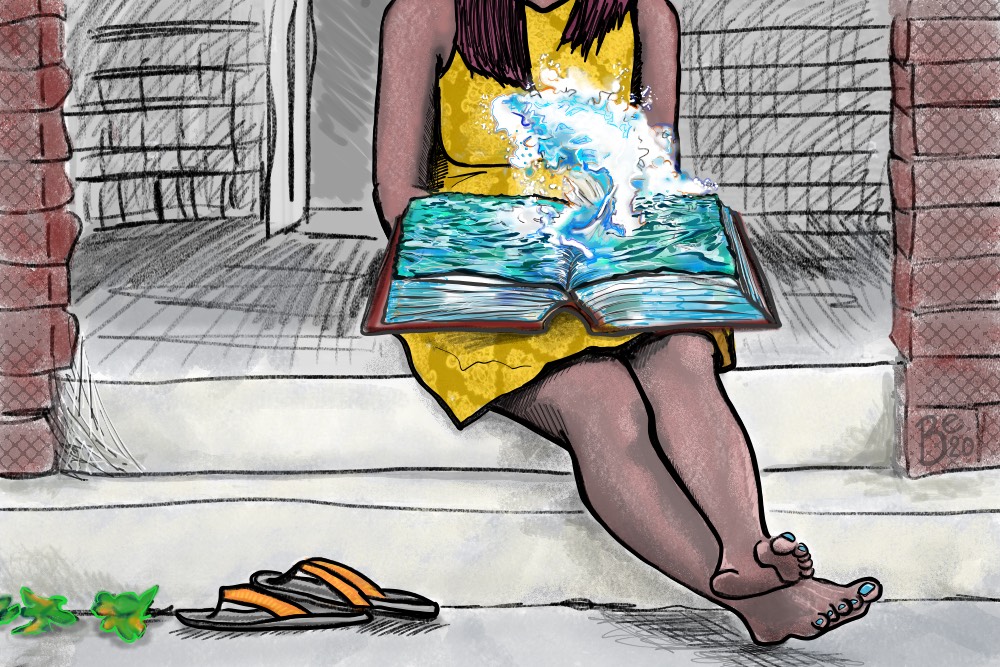 We at Zócalo have always been contrarians when it comes to what constitutes a summer reading list. Our idea of a perfect “beach read” has never been your usual summer escapist fare, which seems right for a summer devoid of the usual escapes. So, we’ve assembled a list of insightful books that can be read while sitting on the stoop, or in a comfy chair at home. And, in this time of a global pandemic and the widespread protests in response to systemic racism—it’s fitting that this year’s Book List looks inward, at difficult questions and complicated issues.

We are excited to share our 15 (mostly nonfiction) recommendations from our contributors and friends that reflect the world today and voices that are missing from the conversation. The Zócalo 2020 Summer Reading List provides some unexpected and fascinating windows into the big questions of our time—including the impact of our racial history on the present and the toll of displacement on asylum seekers—as well as some quirky and hopeful (but also smart) stories—like the tale of a British farm going to seed. They’re all guaranteed to make you think—and have the added bonus of whiling away the (many, many) hours of quarantine.

A slim volume of essays that offers a unique, often humorous, and uncomfortably forthright view of living with schizophrenia—from a young woman whose outlook and experiences offer a whole new way of thinking about this mental illness. She acquaints us with its history and its many dimensions, and argues for more autonomy for people like herself, whose brains have a mind of their own. It’s a valuable resource as we look for new ways to comfort, heal, and bring homeless people who have mental illness in from the streets.

Senior lecturer at Kyoto University, Japan, and author of Visualizing Taste: How Business Changed the Look of What You Eat

EMPIRES OF THE SENSES: BODILY ENCOUNTERS IN IMPERIAL INDIA AND THE PHILIPPINES

What do the senses have to do with imperial expansion and the building of an empire? Actually, a lot. A historian of U.S. foreign relations, Andrew Rotter provides a fascinating history of people’s sensory experience as a window through which to understand everyday relationships between authorities and subjects in British India (1857–1947) and in the U.S. territory of the Philippines (1898–1946). “All human relationships, including imperial ones, are shaped by all five senses,” argues Rotter. The sound of bells and human voices, the smell of dirt, animals, and the human body, and the taste of food. Such sensory perception is an intangible and often-neglected human experience. Yet how people understood their surrounding environments through their senses deepens our understanding of the past significantly. In colonial territories, sensory experience meant violence, control, diseases, as well as resistance to colonial power, embodying not only power relations but also racial, cultural, and corporeal relations. Deeply researched and beautifully written, Rotter’s book takes us to the unknown world of the senses through what people smelled, touched, heard, and ate.

TOOLS AND WEAPONS: THE PROMISE AND THE PERIL OF THE DIGITAL AGE

Fascinating reading. This book is written by a tech visionary who understands that technology can be a force for good; but if used irresponsibly, can have a negative impact on the world.

Historian at Durham University and Gresham College and author of Unbelievers: An Emotional History of Doubt

WILDING: THE RETURN OF NATURE TO A BRITISH FARM

This book wasn’t written with the age of COVID in view, but if you’re looking for reasons to find hope—maybe even joy—in 2020, this is where to go. The project it describes is simplicity itself: a farm in England—one of the world’s most over-cultivated, least wild countries—is allowed to run wild and go to seed. It’s easy enough to tell you what happens next: wildlife floods in and the ecosystem repairs itself with jaw dropping speed and ease. But don’t take my word for it. Unless you follow along as this unfolds, and share in the excitement as each fresh species of insect is found in the newly neglected soil, you’ll be missing out.

Historian at UCLA and author of Collisions at the Crossroads: How Place and Mobility Make Race

IMPERIAL METROPOLIS: LOS ANGELES, MEXICO, AND THE BORDERLANDS OF THE AMERICAN EMPIRE, 1865-1941

Jessica M. Kim’s Imperial Metropolis is a dynamic, urgent account of why Los Angeles wouldn’t be what it is without Mexico. The book tells the story of Anglo investors who envisioned the city as the center of a global metropolis from the mid-19th century forward. This growth was intimately tied to wealth siphoned from Mexico through capital investments in land, labor, and natural resources, often with the support of Mexican elites. The Mexican Revolution proves an important turning point in disrupting these imperial investments, as the proletariat directed insurgent action at Angeleno investors who had laid claim to collective lands. Through years of transnational research, Kim provides a new vantage point to understand well-known actors in Los Angeles history, Mexican politics, and California landmarks.

Historian at Colgate University and author of Black New Jersey

This fascinating deep dive into American Congressional politics during the Civil War moves the historical spotlight away from President Abraham Lincoln to focus on four influential Congressmen: Republicans William Pitt Fessenden, Ben Wade, Thaddeus Stevens, and the pro-slavery northerner Clement Vallandigham. Bordewich’s narrative transforms quotidian politics into nation-shaking legislation. His broad analysis moves from the mechanics of how black troops were enlisted and paid to how Congress paved the way for the postwar amendments that created a nation-state. There’s nothing arcane about this book—it will keep readers absorbed and entertained.

Essayist and novelist in Mumbai whose most recent book is Prelude to a Riot: A Novel

EARLY INDIANS: THE STORY OF OUR ANCESTORS AND WHERE WE CAME FROM

Tony Joseph’s Early Indians is a marvelous capsule of the history of ancient Indians, made accessible and relevant to today. A journalist, Joseph anchors the book in archaeological, textual and genetic research, but he is also sharply aware of current political arguments around “original” inhabitants of the landmass that is the modern nation of India. The book shatters stereotypes and offers insights into that very pressing question: Who are we?

MAN OF TOMORROW: THE RELENTLESS LIFE OF JERRY BROWN

This is a brilliant history of one of California’s most interesting and consequential public servants. Jim Newton, my colleague at the UCLA Luskin School of Public Affairs, is an award-winning journalist with a keen eye on history, policy, and politics. He brings all of these skills to bear on this definitive work, capturing the what, why, and how of Brown’s unique life.

WHAT MAKES A MARRIAGE LAST

by MARLO THOMAS and PHIL DONAHUE

This is a book of interviews with long-married couples, including Ted and me. It reads like a series of funny, moving, surprising, double dates with people that you really want to spend time with. And we all had the absolute pleasure of spending time with Marlo Thomas and Phil Donahue.

HOW TO HIDE AN EMPIRE: A HISTORY OF THE GREATER UNITED STATES

This book reminded me how so much of history, even recent history, remains disputed and obscured. I didn’t know that the catastrophic battle for Manila was one of the bloodiest episodes on U.S. soil, or why we started calling ourselves “America” instead of the “United States” around the time of the Spanish-American War. Daniel Immerwahr diminishes the sense of amnesia that persists around our imperialist past.

THE UNGRATEFUL REFUGEE: WHAT IMMIGRANTS NEVER TELL YOU

A beautifully rendered memoir by a woman who spent her first eight years “in the belly of war-torn Iran” and her next few in European refugee camps, before her family landed as asylum seekers in Oklahoma. There, young Dina comes to appreciate the gains and resent the losses inherent in becoming an American. What gives the book its power is the sense of intimacy in her language and her stories, and her unapologetic candor about the toll that being displaced exacts. Seeing the journey through her eyes provides important insight at a time when America is pulling away the welcome mat for refugees.

Bioethicist and the author of Run, Spot, Run: The Ethics of Keeping Pets

ON VANISHING: MORTALITY, DEMENTIA, AND WHAT IT MEANS TO DISAPPEAR

This book is a moving and deeply compassionate call to action on behalf of the millions of people who live with or care for someone with dementia. By questioning the myths and messaging about aging and dementia, the author gently but insistently unseats our prejudices about what it means to “lose one’s mind.” Harper offers us new ways to understand, appreciate, and interact with people who are by no means “gone” but who are instead in the process of “vanishing well.”

Historian at University of North Carolina and winner of the 2020 Zócalo Book Prize for Hattiesburg: An American City in Black and White

THE INJUSTICE NEVER LEAVES YOU: ANTI-MEXICAN VIOLENCE IN TEXAS

This is a smart, ambitious book that helps chart a path toward reconciling with some of the horrible racial violence that has occurred in our nation, in this case along the Texas-Mexico border. Many historians can tell gripping stories from our past, but few can offer solutions for repair in the way that Martinez does. Our nation’s racial history warrants nothing short of a reckoning, and bold public thinkers like Martinez will help illuminate a path that points us toward a brighter future.

Journalist and editor based in Paris

THE DISCOMFORT OF EVENING: A NOVEL

Translated from Dutch by Michele Hutchinson, this debut novel from Marieke Lucas Rijneveld tells the story of Jas, a 10-year-old girl who lives on a dairy farm in the rural Netherlands. When her eldest brother dies in an ice-skating accident each family member expresses their grief differently, and in silence, within the stoic, religious household in which the remaining siblings are also going through adolescence. It’s dark, raw, disturbing, and utterly compelling.

Bioethicist and the author of Run, Spot, Run: The Ethics of Keeping Pets

The nine short stories in this collection by Ted Chiang are artful thought experiments in bioethics, virtual reality, artificial intelligence, time travel, free will, and even the ethics of keeping pets. The literary devices Chiang employs are interesting, and his writing is crisp and engaging. I couldn’t put this book down.